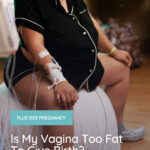 It might be shocking to know people are asking, “Is my vagina too fat to give birth?”, but if you're one of them, you're not alone!

Unbelievably, some OB-GYNs and midwives (as in trained medical professionals!) are actually telling patients their vagina is too fat to give birth.

When Miranda was pregnant with her second child, she wanted a VBAC (vaginal birth after cesarean).

“Around seven weeks into my pregnancy, my OB-GYN said that my vagina was probably too fat for a vaginal birth. And that there was a risk I could die trying.”

Thankfully, Miranda fired that doctor and connected with a size-friendly OB-GYN, but those words still sting years later.

“I have never forgotten the speechlessness or the hot tears of shock that came over me being told the lie that my VAGINA was too fat to birth a child. I may have had some complications in my pregnancies and births, but a fat vagina was not one of them.”

As Miranda shared, there are lasting consequences to telling someone their vagina is too fat to birth their baby. When this person is a medical professional who is supposed to know and implement evidence-based practices, this can cause incredible harm.

Can you imagine the impact this would have on how someone views their ability to give birth?

What about how they'd feel about intimacy with their partner and their overall body image?

But is there any evidence to back this so-called “fat vagina theory”?

Vagina Too Fat To Give Birth?

Before we dive any deeper, let's hear Amy's story.

“I was admitted into the hospital with preeclampsia. My blood pressure was so high they wouldn't actually tell me the numbers and prepped me for induction.

At the time, I was just so scared for my daughter and scared for myself. I didn't even register that comment right away.

Eventually, we tried another round of medicine. And after that failed, we headed into the operating room for a cesarean.

I ended up feeling very depressed and feeling like my body failed me even though it successfully created and birthed a child.

My daughter is almost five now, and that comment from Dr. B still sticks with me today.”

Miranda and Amy's stories are just two examples of countless accounts of medical professionals perpetuating this myth of the fat vagina.

Is The Fat Vagina Theory True?

With a goal of providing evidence-based, factually accurate information (which is lacking from medical professionals perpetuating harmful stereotypes), I hired researcher Anna Bertone to answer the question, “Can fat vaginas obstruct labor and increase the risk of cesarean birth?”.

She began by searching PubMed for “soft tissue dystocia” and found that the term has completely fallen out of use in the research literature.

Dystocia means having a difficult or obstructed labor.

Most recently, a French observational study by Barau et al. (2006) discussed the term “soft tissue dystocia” as a theoretical concept. While they said, “there is no direct support of this concept by medical imagery studies,” they still believed it to be a true phenomenon.

They thought soft tissue dystocia would explain the higher rate of cesareans among plus-sized people than average-sized people with babies of similar birth weights.

It's true that over the last two decades, many studies have shown that higher BMI does appear to affect the progress of labor.

People with higher BMIs tend to have longer labors even after accounting for the size of the baby.

But it wasn't clear why this was the case, so researchers speculated that perhaps there were added soft tissue deposits in the pelvis of plus-sized birthing people that necessitated stronger contractions and more time to progress through labor.

A closer look at the research shows that this explanation doesn't hold water!

Specifically, people with BMIs over 26 took longer to progress to about 6 cm, which is the threshold for active labor.

However, people with higher BMIs did not have longer second stages of labor (or “pushing” stages) compared to those with lower BMIs.

In fact, people with BMIs over 29 had shorter second stages by about 15 minutes compared to the controls with BMIs between 20 and 26!

This contradicts the soft tissue dystocia theory because people of size who reached the second stage of labor did not have more difficulty pushing out their babies compared to those with lower BMIs.

A much larger study (5,341 first-time mothers) by Robinson et al. (2011) found that increasing maternal BMI is not linked to a longer second stage of labor or an increased risk of cesarean birth among laboring people who reach the second stage.

There was an increased risk of cesarean birth among people with a BMI over 25. However, it only applied to the first stage of labor (dilating up to 10 cm) and not the second stage of labor (pushing/birthing the baby).

Again, more evidence that soft tissue dystocia is not real.

If it were a real phenomenon, we would expect it to impact labor progress during the second stage. A fat vagina would mean it would take longer and be more challenging for a person to push the baby out of their vaginal canal. BUT, people of size are in fact NOT more likely to have problems with labor progress in the second stage.

A recent case-control study from Finland compared 300 first-time mothers at term whose labors ended in cesarean birth because of dystocia with 300 similar mothers who had a vaginal birth (Hautakangas et al. 2018).

When they analyzed the participants by BMI, they found that a BMI over 30 was strongly linked to labor dystocia in the first stage leading to cesarean birth.

The authors said the reasons for longer first-stage labor with higher BMI are unclear. They think it might be related to metabolic circumstances influencing oxytocin receptors. And they suggested that cesarean births could be avoided in people with BMI over 30 by giving more time. An additional 2-4 hours would make a big difference to progress in the first stage of labor.

This literally means allowing the body to do what it needs to do at its own pace which is, in fact, evidence-based medical care and should be happening anyway!

In addition, there are higher rates of inductions for plus size people, which may also contribute to cesarean births and obstructed labor.

In summary, “soft tissue dystocia” is no longer a relevant clinical term in current research. It appears that researchers were looking for a way to explain longer labor among people of size. They came up with this “soft tissue theory” or “fat vagina theory” without any supporting evidence.

So, Is My Vagina Too Fat?

If you've been questioning, ‘is my vagina too fat to give birth?', you now know the answer is no!

There isn't evidence to prove a fat vagina theory, but studies definitely show a medical bias against plus-size people, and that we know leads to higher rates of complications in and of itself!

Hopefully, it won't take too many more heart-wrenching stories for care providers to stop telling patients their vaginas are too fat to give birth!

“I had a horrible time as a 20-year-old first-time mother. I was led to believe I was too fat to birth my baby healthily. I've had two others since and realize now that I am so capable!!” – Hailee