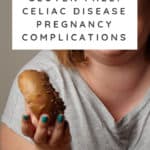 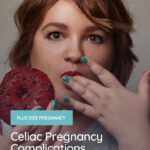 Celiac pregnancy complications – we have studies showing increased risks but we're not having this conversation. It's time!

Last year my mom, in her sixties, received a celiac disease diagnosis. My mom mentioned how I should take a test because I have a greater risk of also having the disease.

She also reminded me, as moms do, about all of the digestive issues I've had my whole life. Could food be a root cause?

Following a miscarriage in 2012, I've never had another pregnancy. Recently I've been researching a lot about infertility – not just allowing care providers to blame it on my weight.

After connecting with Jenny Finke of Good For You Gluten Free, I think it's time I stop putting off taking this seriously. Now I just need to connect with a size-friendly care provider! I'm really thankful Jenny has offered to share her expertise and research. As I'd like to dive into some of these celiac pregnancy complications we're really not talking about.

I’m Jenny Finke, the blogger behind Good For You Gluten Free and a certified nutrition and health coach. I also have celiac disease.

Jen McLellan invited me to guest blog today about the connection between celiac disease and pregnancy complications.

Before we start, I first want to tell you more about celiac disease and my story.

When someone with celiac disease consumes gluten, which is found in foods containing wheat, barley, and rye, the body launches an immune system attack on the small intestine. This not only damages the small intestine, but also results in your body’s inability to absorb of nutrients.

The only way to reverse and prevent further damage is through a strict gluten-free diet.

When I got my celiac disease diagnosis in April 2012, at the age of 35, I didn’t know much about the disease at all. I had already had two beautiful children and I had no trouble conceiving them or complications at birth. Except I was low on iron and Vitamin B, which I fixed with supplements and shots.

I had lived fairly symptom-free life. Although in hindsight, I had all sort of symptoms from unexplained red bumps on my arms, geographic tongue and low blood sugar issues (I’d feel shaky if I didn’t eat every few hours).

However, in the years following the birth of my second child, I began to experience more digestive distress. My belly would bloat up each night and I suffered from embarrassing gas. My symptoms got progressively worse. I hated the way I felt at the end of each day.

Celiac disease is an inherited, genetic disease; however, the disease lies dormant in many people until later in life. The majority of celiac patients get their diagnosis between the ages of 30-60. This peaks among people in their 40’s according to the Canadian Celiac Health Survey of 2002/2003.

Some scientists say they believe celiac disease requires a trigger. This is some sort of health or adverse life event that suddenly causes your body to react to gluten even if you’ve consumed gluten your entire life without issue.

One of the triggers cited for many women with celiac disease diagnosed later in life is pregnancy. While there isn’t enough research to state this conclusively, for me, my celiac disease seemingly “turned on” in my early thirties AFTER I had both of my children. I personally believe pregnancy was that celiac “trigger” for me.

Can Celiac Cause Complications in Pregnancy?

Unfortunately, those with celiac disease often have higher rates of pregnancy complications.

In an Italian study published in BMC Gastroenterology in 2012 aimed at exploring the association between celiac disease and menstrual cycle, gestation and postpartum period, sheds light on the possible correlation between infertility complications and celiac disease. The study included a sample of 62 women of childbearing age with celiac disease and compared that information to a control group of 186 healthy (non-celiac) women.

Another possible complication comes from nutritional deficiencies associated with women who have undiagnosed celiac disease, according to Dr. Ralph E. Warren in his article, “Infertility and Celiac Disease” published in Creating Families Magazine in 2008. A woman’s ability to absorb vital nutrients, such as iron, folate, zinc and selenium, has limits when she continues to consume gluten.

Nutritional deficiencies not only can be linked to a variety or pregnancy complications but also may present complications in newborns as well.

What Does This All Mean?

For women suffering from infertility, getting a celiac disease diagnosis during or prior to her childbearing years is urgent. Experts estimate that 1 in 100 Americans have celiac disease but as many as 97% of people with celiac disease don’t even know they have it! A delay in diagnosis can significantly shorten a woman’s childbearing years. Furthermore, a celiac diagnosis gives a woman the opportunity to heal her body through nutritional interventions (gluten-free diet, improved nutrition, etc.), thus allowing her to potentially avoid expensive and sometimes physically painful and emotionally distressing fertility treatment options.

Furthermore, ruling out celiac disease can improve a woman’s chances of vaginally giving birth to a healthy, full-term baby. Some studies suggest that babies are more often born via cesarean section in women with celiac disease, and emerging research is working towards determining if babies born via c-section have a higher risk of celiac disease later in life.

If you have suffered from recurrent miscarriages, anemia, fatigue, irregular menstruation or other reproductive disorders, ask your doctor to test you for celiac disease. My hope is that fertility clinics will screen for celiac disease before administering expensive and emotionally draining treatment options.

For a celiac disease screening, ask your doctor for an IgA tissue transglutaminase (ITG) antibody test. The Celiac Disease Foundation says this test is accurate 98% of the time. This is for someone with celiac disease who is currently on a gluten-containing diet. (My IgA blood test was positive.)

You must be on a gluten-containing diet in order for these tests to be accurate. So, test before going on a gluten-free diet.

The IgA test will give you clues as to whether further diagnostics are necessary. If your doctor is unwilling to test you for celiac disease, I recommend you get a second opinion for another doctor.

Also, there are home celiac screening kits available if you want to do the test in the privacy of your home. However, most doctors will want to conduct a test of their own before performing additional diagnostics, such as a biopsy of your small intestine. A biopsy is the gold standard for formally diagnosing celiac disease.

Remember, you know your body best. Listen to every clue it gives you. If you suspect you have celiac disease (or gluten sensitivity), use this article as a conversation starter with your health care provider. Such discussions will help you begin to ask the right questions and will eventually lead you closer to finding your truth.

Jenny Finke is a certified nutrition and health coach. She founded her gluten-free blog, Good For You Gluten Free, after a devastating celiac diagnosis in April 2012. Today she helps her readers and clients live a healthy, gluten-free lifestyle. She works hard to advocate for those living with celiac disease and/or following a gluten-free diet for health reasons.

You can learn more about Jenny’s gluten-free and celiac coaching services, or find gluten-free recipes and other information on her website, Good For You Gluten Free.