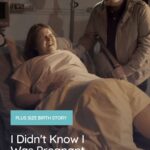 Are I didn't know I was pregnant stories real? Yes! It actually happens, and this is Michelle's story that was featured on Discovery Health.

I Didn't Know I Was Pregnant

1. Had you ever watched one of those, “I didn't know I was pregnant” shows before you ended up staring in one?

Before my story was featured, I had never watched those type of shows before because I thought they were sensationalized for tv.

I couldn't imagine being pregnant and unaware until it happened to me.

Interestingly, I did contact that show but they weren't filming any new episodes at the time.

I replied to an ad for amazing birth stories and Discovery Life chose our story for the show.

2. Many women with PCOS go on to become moms. Were there other reasons why you were told you couldn't become pregnant?

I have been obese my entire adult life. I also have Type II Diabetes.

My Gynecologist reported that these three factors would make it impossible to conceive.

My progesterone levels were too low and I did not ovulate.

Several years ago when I was married and trying to conceive, I took Clomid shots with no results.

From my heaviest weight I have lost 100 pounds but still had a long way to go. I was eating low carb during the entire pregnancy, so I think that helped with my blood sugar levels and losing weight.

3. What were those days like after you found out you were pregnant but before you gave birth?

The home pregnancy test was on Wednesday, July 10th, the doctor confirmed my pregnancy on Friday, July 12th.

It was a total of 6 days and I was in shock.

I was worried since I had no prenatal care that the baby would have health concerns.

The first time I saw her on the sonogram was the morning before I gave birth.

Next, I was worried about how I would get all of the necessary items for a baby since I had absolutely nothing.

My family, friends, and even strangers gathered everything I needed over the next few weeks.

She was released from the hospital 45 days after birth and we had everything and more than new parents would need.

I started having contractions Monday night, which I thought was gas.

I didn't sleep all that night and I thought I was having a miscarriage.

As I arrived at the hospital they did the sonogram right away and confirmed I was in labor.

A few hours later my water broke and I was transported to another hospital by ambulance.

Memorial Hospital has the leading NeoNatal unit in the SouthEast and I was very glad we were there.

The contractions were intense and I had nothing for pain all day. I was dilated 2cm before the transport and 8cm by7pm.

I finally got the epidural and I was still experiencing intense pain. They administered the second epidural and it finally eased the pain.

The doctor assisted me to push but after that second epidural, I was numb from the neck down. They decided our vitals were declining and cesarean birth would be best.

I was rushed to Labor & Delivery in a flash and they put me under anesthesia completely within minutes. It took several hours to awake from the anesthesia and several more hours before my vitals were cleared to see her.

I cried at the first sight of this tiny baby wired to monitors in her incubator.

I honestly couldn't believe she was mine. Aside from the radiating pain under my fat roll, I didn't feel like I just gave birth!

5. Did your maternal instincts kick in right away?

The show said 5lbs but that was her weight when she was released from the hospital.

At birth, she was 3lbs 14oz and appeared so fragile but she was strong! I was able to start pumping breast milk and start feeding her in addition to the formula tube feeding she received.

She wasn't on oxygen but had a lot of wires attached, so holding her was limited the first few days.

I was released from the hospital three days after and her total stay was 45 days, so that part was tough.

I loved holding her bare against my chest. It was the best feeling in the world.

Being a mom was the one thing I wanted most in life, so it came naturally. She was a super easy baby too.

She barely cried and was sleeping through the night quickly.

I was so nervous about her possibly stopping breathing that I held her next to me, in my arms every night. S

he will be 2 in July and she still sleeps in the same place. It is more a comfort for me than her at this point.

6. What is the end to your I Didn't Know I Was Pregnant story?

Dana had been my friend 2 years before I ended the relationship with Lily's biological father. I had no idea where my life was headed after the relationship ended and then I found out I was pregnant.

He was among the few that knew before she was born, and he was supportive and excited for me.

He was always there when I needed a friend and he did not hesitate to give us a home.

Once we were free to pursue a relationship, everything fell into place. He is the best Father to Lily and husband to me.

Having a baby at 35 was scary but amazing!

Getting remarried at 36 was exciting and I can tell you it is not too late to find happiness.

I had lost my faith in God over the 5 years prior to Lily's birth.

The moment I looked into her eyes and felt her tiny fingers grasp mine, I knew He had a plan for my life.

I can't take any credit for bringing such a miracle into this world, because without God I know it would have never happened. I thank Him every day.

He also allowed me to meet the love of my life and have an amazing family.

Faith in God was my support during this journey, but not everyone has that. Faith in yourself along with supportive friends and family will make a world of difference.

Michelle's “I didn't know I was pregnant” story is very unique. See our collection of plus size birth stories!