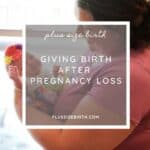 If you've experienced a loss please know Rebecca is very raw and you might find it to be triggering. I've included resources at the end of this story and can't thank Rebecca and her photographer, Aperture Grrl, enough for sharing.

Conceiving this baby was quick, but nevertheless painful, just 4 months before my positive test, I lost a baby. I have baggage with loss – having also lost a baby in 2005.

And this miscarriage compounded the lingering pain from that. So my positive news was not the overjoyed moment my previous pregnancies were. This one was crippling fear.

I knew if I lost another baby, I would die. My heart simply couldn't take any more heartbreak. Not to mention I'm 35, and this was my last pregnancy if I went to term or not. Live or die, this was it.

As the weeks went by, the fear did not subside. I was scared until the moment she was born. If I am being honest, I'm still scared.

But the weeks went on…

24 weeks we started talking about viability

28 weeks we started believing we might just bring a baby home.

30 weeks began to buy a few things. We found out that she was a girl, and with 3 sons at home I was excited, but also scared. My first loss, was a Girl, Zoe Naomi.

And though I didn't know for certain, I was resolved to believe that this baby was also a girl.

35 weeks, I started preparing for a baby to come home.

Related: How To Talk About Plus Size Pregnancy Risks In A New Way

37 weeks we started the at-home labor starters. Not one of which worked. We did membrane stripping, even lost my mucous plug but despite my disbelief, it regenerated. I didn't even know it could do that.

I did not develop gestational diabetes this pregnancy, although I have in the past. It was awesome to be able to eat whatever I wanted throughout the entire pregnancy. But because of my history with it, they decided to induce me at 39 weeks.

I was ready to meet this baby.

So on September 14, at 10 AM they broke my water. They wanted to give me Pitocin but I wanted to try and see if my labor would start on its own.

I asked for the epidural. I've had a baby before without. My husband questioned my decisions, but thankfully he did that internally. This time he completely supported my decision.

I was losing my mind. Crying, begging, I can't explain to you how intense those contractions actually were.

So, three hours in, I did what I thought was a failure, I got the epidural.

It took nearly an hour to take effect. I didn't expect that.

Related: What 5 Miscarriages And One Stillbirth Taught Me About PCOS

In fact, I thought it didn't work, and hit an all-new stage of panic. That I have gone through the pain of getting an epidural, and it didn't work?!?!  But eventually the pain subsided and I had a pain-free contraction and all the world was right.

However, I did notice that my very regular contractions had also subsided.

After the epidural they checked me and I was dilated to seven, which was pretty good! When I got there just a few hours before, it was only dilated to three. I was pleased with the progress and relaxing enjoying painless labor.

When I finally convinced somebody to check me, three hours had passed.

The beautiful rhythmic contractions had stopped showing up on the monitors. Although they tried to convince me that I didn't mean that the contractions have stopped.

I'm not a first-time mom and I know what I'm doing.

I knew for a fact my labor had stalled with this epidural. After three hours, I was still dilated to seven. So they gave me a couple drops of Pitocin and restarted my contractions which took off like champs!

I decided to lay down and take a little nap. As I knew what was ahead of me and it was going to be a doozy. I pushed for three hours with most my kids.

The exception to this was when I had no epidural and I pushed very briefly. Yet, now that I had the epidural I was convinced I'd have to push for several hours. So I quieted my room, turned off the lights and closed my eyes for an hour.

My photographer, who has been at dozens of births mentioned that the baby was decelerating during contractions, which I was assured was very normal. I was not happy about this but I believe in the people who deliver babies.

They checked me and I was at 10, but the baby wasn't far enough down to start pushing. So we relaxed for another hour.

At the end of the last hour at the decelerations of the baby's heart were more noticeable.

Instead of being at a healthy 140, her heart was going down to about 100. Something inside of me said this is getting out of control but my epidural was losing its effectiveness.

I was feeling a lot of pressure, and I was feeling the urge to push. The baby's heart rate dropped to 92 and in came the nurse…

She says let's do a practice push and see how much time it's going to take. I feel a sense of urgency and her mannerisms, but her words are calm, her voice is steady. I push once and she says let's call the doctor.

From what I understood the doctor was on the same floor of the hospital, just waiting for us to call her.

The nurse says on the next contraction we are going to pull your leg back and see if we can get some leverage. With the next contraction, with my husband on one side, my mother figure on my left, and my best friend at my feet, my baby decided she would not wait. Her head was delivered with one push and on the next push, her whole body emerged with her cord wrapped around her neck twice.

I delivered her at the end of my bed, with a nurse making the catch before my OB/GYN could get into the room.

Finally, the most fear stricken pregnancy was over.

There's a moment that my photographer captured on film, it's the moment when I realized she was here. She was alive, I was alive, and it was over.

Charlotte arrived at 6:35 PM, eight hours and 35 minutes after my water was broken, in three “practice” pushes. My rainbow baby. She latched on almost immediately, in fact, started rooting before I had delivered the placenta.

Our entire family is charmed. Including her three brothers, her father who adores her and of course this mommy who spends most of my days staring at her and checking her breathing.

She's absolutely perfect. Born 7 pounds exactly 19 inches long in the most peaceful and love filled delivery room. She is the perfect ending to all my birth stories.

Giving Birth After Pregnancy Loss Support:
Still Standing Magazine: Surviving Child Loss and Infertility
Now I Lay Me Down to Sleep
Stillbirthday This site has been helpful for thousands of loss families (both religious and non-religious) and is from a religious perspective
March of Dimes Stillbirth Resource
The Carly Marie Project This site has an extensive list of recommended loss books for miscarriage, stillbirth, and also helping kids to understand loss.