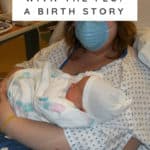 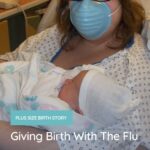 Meg shares her incredible natural birth story of giving birth with the flu.

Yes, she had the flu and labor didn't stop.

She wasn't just giving birth with a cold – this was the flu!

Meg wasn't able to touch her new baby boy for 48 hours after his birth.

Her story is raw and she inserts some humor along with a few cuss words.

Giving Birth with the Flu

Well, it all started on December 30th. I was up all night with nasty congestion and sore throat, and I was very tired the next day.

At approximately 8 am the 31st (40 weeks and 4 days pregnant), I started getting contractions different from Braxton Hicks. I timed them from then until almost noon before I called my doctors office. I wanted some advice on what to take for what I assumed was a horrible cold.

The headache that accompanied it was unlike any I'd ever felt.

I mentioned the regular contractions and she advised me to go to the hospital. I remember saying in a terrified voice: “What? ….Seriously?” Like I had somehow accepted that I would be pregnant my entire life.

I arrived there, and I kid you not, 96% of the people in the E.R. were wearing face masks (not alarming at all).

Turns out, there was a huge outbreak of influenza in Harrison, AR right then. As I was being attached to the monitor, the nurse swabbed my nose to see what kind of ‘cold' I was dealing with.

I tested positive for the flu, of course, for which they quickly put me on isolation.

My nasty “cold” steadily turned deathly and I began to feel like utter doom, on top of the contractions quickly progressing.

I was dilated at a 4 when I arrived, but with the flu suddenly facing the baby, the staff highly encouraged him to stay in his safe environment at least until I had my 2nd dosage of antibiotics.

Going Into Labour With The Flu

Despite being on bed rest, I still progressed. During the night, I felt absolutely miserable and got zero sleep.

They pumped me full of fluids from being dehydrated so every ten minutes I had to pee. Imagine being 300lbs and full of baby with a seemingly constant full bladder to the point of pain, and contractions.

I was shaking uncontrollably with fever, plus the anxiety of knowing my contractions were getting worse and my baby would be coming. I was terrified of birth.

That night, I did not sleep either.

The next day with two sleepless nights in a row under my belt, I felt absolutely deathly and was now dilated to a 7.

Doctors decided there was no stopping labor so they prepared for it.

I was checked a short time later and was at an 8.5, and while I was being checked, the nurse accidentally broke my water.

Related: My Healthy Plus Size Pregnancy

Up until that point, my contractions were hurting like hell but I was managing them! However, once my water was gone, they were absolutely dreadful.

It was around that time that I started to feel pretty nauseated with the contractions. Everything was kind of a blur, but I remember asking my Mom pitifully for sips of water a LOT because it seemed to help with nausea.

After that, things moved far too fast for my anxious self.

There is a time when you're about to be a new mother that you realize, “Holy shit, I'm about to give birth to a human being” and panic sets in- at least it did for me.

With a few more contractions, I was a 9, and my cervix had a tiny bit of catching up to do.

My doctor had to stretch it open which was wretchedly painful.

Soon after, I had the severe urge to push (or take an overwhelmingly giant shit, as I like to call it- this hurt SO bad). Even though I was absolutely terrified of doing it- it happened with a little help from everyone else in the room.

Related: A Plus Size Birth Story: I Didn’t Know I Was Pregnant

I actually recall a moment where I cried out, “I don't think I can do this.” However, it was out of my hands.

They grasped my legs and after the first couple pushes, I mastered that shit.

It felt like that horrible crushing movement your stomach makes when you're heaving, except instead of up, it shoves everything down. Pushed 3 times for 3 contractions, and he was out.

I felt quite literally like he was ripping me open when he crowned, but after his head approached, everything else just followed closely behind and I just tried to look at him as much as I possibly could.

They kept him far from me though because I was contagious.

The birth of the placenta was painful for me, because everything was so sore, and my doctor pressed on my stomach to help deliver it. She inspected the inside of my vagina for tears, which was extremely uncomfortable.

She spent a considerable amount of time sewing me up- seemingly very small tears in multiple places (I heard something about a 2nd-degree midline tear, but I was pretty out of it).

When they pressed on my uterus after delivery, it was awful, but then again… every little touch after I had him was pretty hard to bear because I felt so overstimulated.

Related: Plus Size Stigma within the Medical Community

The recovery has been awesome, though. Despite my vaj resembling something I can only imagine as a shipwreck, I'm getting around awesomely. It's just a teeny bit tender. Bleeding has not been too bad.

My son is absolutely and completely healthy ( hopefully my colostrum is helping this. I'm pumping every 3 hours or so.) He's 7 bs, 14 oz, and 20 in long.

He looks like me, except his little baby penis is gigantic. I don't know why I noticed that right off the bat, but it was bigger than his big toe. lol

My nurse let me see him through the glass in the isolation room today.

He was so beautiful, it took my breath from me.

I should be exhausted because not only do I still have remnants of the flu, but I was in active labor for 27 hours. My son was born earlier today, and before that, I hadn't slept for 48 hours. I haven't been able to rest since I saw his face.

Hope I didn't scare any of you Mom's about to deliver.

I'm not sure I'd do this again, but I know I am SO fucking proud of myself. I survived through a natural childbirth, with my gorgeous boy at the end, and when you put it that way, who cares about a shipwrecked vagina?

Thank you for allowing me to share my story with you! 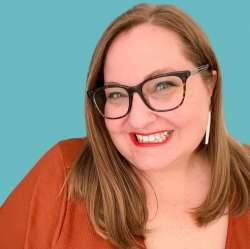