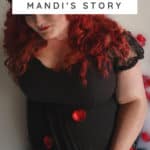 Mandi's milk bath maternity photos are captivating. I never could've imagined the story behind the images – a survivor experiencing a plus size pregnancy after cancer.

This is Mandi's pregnancy after cancer story.

Seven years of hoping, dreaming, wishing, and praying that my body would be capable of carrying a child. And now here we are at 37 weeks pregnant experiencing pregnancy after cancer.

My husband, Justin and I had planned on having children shortly after our vows. When instead, just three months after our wedding I was diagnosed with stage three metastatic melanoma.

We buckled down hand and hand getting through one of the absolute worst things newlyweds can go through. Immediately after diagnosis, I had to have one surgery after another, then began a year of weekly chemotherapy treatments.

My body was then completely altered internally and externally.

I had a lot of unwanted physical changes including having the curve of my right butt cheek removed.

I lost my hair and gained upwards of sixty pounds.

One of the worst parts of it for me was being told we had to wait until I was cancer-free for five years to get pregnant.

And even then the doctor would advise against it as melanoma is one of the few cancers that can spread to a fetus.

I was 24 years old and wanted to have a few kids.

Related: Plus Size And Trying To Conceive – What You Need To Know

Being told I had to wait that long and the weight of deciding if I should even try to get pregnant when the time came was a bit devastating.

It was a rough first year of marriage.

But Justin and I made it through closer and stronger than we ever thought imaginable.

My body has been through hell and back.

I am a warrior.

I am a survivor.

Eight surgeries, tons of moles biopsied, and I have more scars than I can count.

Now I have fibromyalgia, arthritis in both my hips, and degenerative disc disease.

But this body, my body, is a badass.

Related: Giving Birth with the Flu: A Plus Size Birth Story

I made it to the five-year appointment with basically one thing on my mind: Would my specialist clear me to get pregnant?

It was a bit daunting.

Justin and I had many discussions and researched pregnancy after melanoma relentlessly.

We had decided that if the doctor cleared me to get pregnant we would try to have one child biologically. And love that child deeply!

In weighing our options we also researched infertility treatments, adoption, and surrogacy as we wanted to be prepared and know what we were getting into. I was scared to ask my specialist, I didn't want him to think I was careless in this decision.

Thankfully, because I have had no recurrences of melanoma and all moles biopsied have been benign he said we could try to get pregnant!

Justin and I are elated to welcome a little girl this October. And then right after we have her we will celebrate seven years of marriage.

After everything I have been through I never thought I would be able to get pregnant, nor carry to term.

Related: Somewhere Over The Rainbow: Giving Birth After Pregnancy Loss

That is not to say that my being pregnant has been easy.

It has been incredible, wonderful and difficult. It's been especially difficult on the right lower half of my body.

The cancerous spot was on the curve of my right butt cheek. And had spread to my right inguinal lymph nodes which I had to have removed.

That's a very unpleasant surgery, in a very inconvenient area with a long recovery time.

The area they cut for my particular surgery was up to my right thigh. It went into the crease between my vagina and thigh up to my hip.

I had to have two JP Drains in my stomach. They went down into my right thigh draining out the lymphatic fluid for a month.

That surgery led to me having lymphedema in my right thigh and leg. Which means it swells because of the lymphatic fluid collecting there.

Before pregnancy, that area had significant pain. And now being pregnant, when those round ligament pains happen, the ones on the right side are excruciating.

The physical pain before pregnancy was pretty rough. Thankfully, for the most part, the pregnancy has helped alleviate some pains and at times I even felt really good.

Related: Yoga for Back and Hip Pain During Pregnancy

Currently being 37 weeks though it's starting to really take a toll.

My lower back, where the degenerative disc disease is located, and arthritic hips are getting more and more painful as each day goes on.

Sometimes the physical pain wears on me mentally.

I feel overwhelmed by it, but then I remember my body is not at all a normal body, it's a badass warrior that's been through more than most and it's ultimately worth it to have this baby.

My pregnancy has also had its fair share of scares.

Women produce a lot of estrogen while pregnant and that is something melanoma likes to feed on.

Pregnancy also brings many bodily changes including new moles and freckles that grow and change and because of that, I have had to have a few dermatology checkups. I also see my specialist to make sure I have not had any changes in moles or new growths.

At my last appointment, a few weeks ago, my doctor found a few suspicious moles that I have to have biopsied once I have the baby.

Since I'm so far along my dermatologist does not want to inject me with the numbing agent as it could affect the baby.

One of the many scary things during pregnancy is the possibility of a recurrence. I can't undergo my routine MRI and CT scans while pregnant. So the melanoma can be lying dormant and we would not know.

I am very forgetful. As a child I had a few concussions, then the chemo brain (it's real) and now the pregnancy brain. I try to be kind and remind myself that it's nothing out of the ordinary.

But it scares me when I forget things frequently and/or misspeak, I think what if it's melanoma in my brain.

The scariest part of all, though, is that if it were in an organ somewhere, it could spread very quickly to my fetus.

I had to see a high-risk pregnancy doctor fairly early on to get established in case something went wrong in the pregnancy.

Related: Plus Size Pregnancy – Everything You Need To Know

At that appointment, because of my history of melanoma, that doctor sent orders for my placenta to be sent to a special lab to be thoroughly examined for melanoma to make sure the baby does not have it.

I can't dwell too long on the what if's and the what the future holds, I can't let that bog me down. Whatever happens, I will continue to count my blessings because I am over the moon in love with this little girl already.

I have to live in the present and welcome her with an open heart. Her name is Betty James. She will be loved unconditionally by Justin and me, her fur siblings, and all who know her. She is our little miracle baby.

Betty is unfortunately automatically at a higher risk of melanoma because she is my daughter.

I will do everything in my power to teach her how to properly protect herself against the sun's harmful rays, how to check her spots and she will see a dermatologist regularly.

Justin and I are so excited to be stepping into this role as parents. Life after cancer has not been easy, and throwing pregnancy and a baby into the mix hasn't been easy either but already it's the best thing we've ever done.

I will never let cancer stop me living my life to the fullest and I can already tell Betty is strong and determined just like her momma.