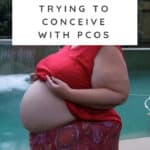 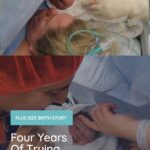 Nadine, the founder of Plus Maternity Australia, shares her four years of trying to conceive with PCOS (Polycystic Ovarian Syndrome) Story.

Prior to my daughter’s arrival, I planned things for other people for a living. The decision to have a child was no different. I had been married to the love of my life for quite a few years. I spoke to friends who had recently had babies and discovered it could be tricky to get into your chosen OB/GYN once pregnant.

So I thought I’d get a pre-pregnancy check-up and get on the books at the same time. The appointment was a long way off, but I wasn’t in a rush so was happy to wait. I also started seeing a naturopath, again just to be the best me that I could.

This is my story of four years of trying to conceive with PCOS.

The appointment with the doctor finally rolled around. The appointment went well. The big question – were my cycles regular? Yes, I’d been on the pill for years, they were perfect – famous last words as it turned out. Christmas came and went. It was my closest girlfriend’s 30th birthday in January 2004, a big affair at a restaurant. I remember thinking, I shouldn’t have a drink to celebrate, my period is late – oh, I might be pregnant, how exciting! This was the start of the ‘something’s not right’, but I didn’t know it at the time.

Mid-year was fast approaching. We were having lots of sex but I still wasn’t pregnant. My job was stressful and I wasn’t enjoying it anymore.

Related: 4 Things You Need to Know About Getting A Noninvasive Prenatal Screen

Working in a small industry and word of mouth that I was looking and keen to jump ship saw some offers come up.

I had now been off the pill for more than 12 months; my cycles seemed to be getting longer and less regular. I went to the GP twice to do a pregnancy test, even though the tests at home were negative.

The big announcement over the Christmas table (literally) is that my best friend is pregnant. That was a Christmas dinner to remember! I was a little sad for myself: my cycle is now really all over the place length-wise but a new problem arises – heavy, excessive bleeding. Think 11, 12, 13 days’ worth and every time I finally get my period it’s the same.

I finally find the courage to tell my girlfriend who is pregnant about the bleeding, she suggests I see her OB/GYN – it’s been 18 months since I saw the other OB/GYN, why not see another? All the things that go through your mind – long cycle, heavy bleeding – all I can suggest is stay away from Dr Google.

Appointment with my girlfriend's OB/GYN.

I start the first of many tests, including blood tests galore; I think I’m donating to the blood bank via the pathology lab. My husband also has blood tests and gets a sperm analysis done, just in case. I also had my first ultrasound – a trans virginal ultrasound.

Being plus-size made the scan more difficult. Having a full bladder and waiting for the appointment was only the start. The doctor was lovely – she was patient and calm and never made a big deal about my shape or the difficulty we had in getting the scan done.

Back to the OB/GYN and he tells me I have Polycystic Ovarian Syndrome (PCOS). Looking back I should have seen the signs, but there wasn’t as much information out there about PCOS as there is today. PCOS isn’t his specialty – but he is referring me to the best person he knows, an associate professor at the Royal Women’s Hospital who is a reproductive endocrinologist and the man who wrote the bible on PCOS in Australia!

Related: How To Talk About Plus Size Pregnancy Risks In A New Way

At our first visit the RE looks over all the test results that we have brought to him and after a physical examination of me concurs with the OB/GYN: of course, I have PCOS. I buy his book from the receptionist as we are leaving and armed with a prescription for Metformin (the wonder drug for those with PCOS) leave to return in six weeks’ time.

Well, only five weeks as I’m really impatient to be told come back in three more months – the medication needs time to work after all, but yes, I had lost a few kilograms and was feeling better.

Another appointment, and by now I have learned to always take someone with me: sometimes there is just too much information for me to take in and I switch off or only hear the bits I want to hear.

I’m on a flight out of Sydney to Cairns to meet my husband for a weekend in the tropics. We have a great time – we have lunch at a nice restaurant overlooking the beach, I order something simple but it arrives decoratively drizzled in oil and it seems now that any food that is greasy, fatty or oily makes me unwell. The thought passes through my mind that maybe I’m pregnant?

The night before we leave I wake up about at 2:00 am feeling terrible: sick, vomiting constantly type sick. The pain passes eventually. We fly home that afternoon. I let mum know I wasn’t well, she thinks it sounds like heartburn and gives me some tablets that might help – I pop them into my bag and keep going.

Christmas Day rolls around and I am still feeling average and unwell: can’t keep food down, anything fatty makes me sick but Nurofen plus is my friend. I can take at least 10 a day and keep functioning. I’m beginning to think that something else might be wrong. We have a BBQ chicken for lunch on the 28th of December and I get sick again. We make an appointment to see the GP. Just food poisoning and you have probably over-indulged over Christmas. Ha!

Related: Is My Vagina Too Fat To Give Birth? Yes, This Is A Real Question!

A very quiet New Year's Eve, then new years day and I am feeling very under the weather. Mum calls our GP and makes him do a home visit, as I can’t get off the lounge now!

The GP arrives, calls the local hospital. I am yellow with jaundice, and have acute cholecystitis, with gallstones coming out of my gallbladder and getting stuck somewhere in my bile duct. 17 days later, 2 operations at different hospitals and enough morphine to knock out an elephant  – I am home and enjoying the rest of my Christmas holidays.

Heads up if you are fat, fertile, female and forty; or at least a few of them and you don’t feel well, have chest pain and can’t keep food down – I would suggest you speak to your GP about Gall Stones! I wasn’t forty or fertile – but I was fat and losing weight too fast which upset my body and gallbladder completely.

Finally back to work after my Christmas, and we are looking at moving onto assisted conception.

Tempt’d cycle. A Tempt'd cycle is when you use a basal thermometer to measure your body temp during ovulation.

Clomid (medicine) & Temp’d cycle and did an ovulation test (OPK tests) from day 12 > 22 (no positive). Somewhere along the way I also started seeing a Chinese herbalist and specialist in fertility acupuncture, just for that added boost.

Comid & Temp’d cycle and did OPK tests from day 12 > 22 (no positive). 26th July, 6th appointment with the Reproductive Endocrinologist (RE).

Clomid & Temp’d cycle & did OPK tests from day 12 > 22 (no positive) 26th October, 7th appointment with the RE, and we talk about reducing my stress levels and going part-time at work.

Clomid & Temp’d cycle and did OPK tests from day 12 > 22 (and a very faint positive – maybe?) I was so excited, but my husband was in Melbourne for work, I flew down for the night!

Temp’d cycle & did OPK tests from day 12 > 22 (no positive) 8th appointment with the RE, who refers me to a PCOS specialist who works with IVF Australia. I think I was in shock by then, I was sure that everything that we had done up till now was going to work, it just never crossed my mind that it wouldn’t.

I have a Lap/D&C/ womb clean booked in with the RE at the Royal Women’s’ Hospital in Sydney.

How ironic that the appointment with the IVF specialist is in my OB/GYN's office (he shares the office two afternoons a month) the very room we started our journey almost two years earlier.

We commence our IVF cycle and after an early morning blood test on Monday the 18th of June, I get the call that we are pregnant!

Our beautiful daughter arrived via unscheduled c-section on Monday 3ed of March 2008. At 41weeks plus 4 days, weight 4.45kg & length 49cm – almost 4 years after we started our journey!  She has just turned 3 and we are blessed to have her.